February 10 Departure date
Finally, after months of planning and waiting we are off to Italy for 6 weeks. Right now we are at the Moncton airport, lucked out and got bulk head seating for the long flight, but we don't have boarding passes for our flight from Munich to Florence, we'll try to figure that out when we get to Toronto. They told us we would have to do this in Munich.

We are flying out between 2 storms. One finished this morning, all flights were cancelled this morning, but this afternoon is thankfully on time. Don our next door neighbour gave us a ride to the airport which is great, Marc and Mary-Sue are going to get our car to the airport for when we come home, so we should be all set.

Andre has been on a big project the last few years, so this is our first extended trip to Europe in 3 years. We have booked an apartment in Lucca, Tuscany region for 5 weeks. We will travel on a few weekend overnight trips from here. Then our final week we will split between Venice and Rome with our final night in Naples before we fly home end of March.

We're really looking forward to exploring the country, unfortunately even though the country isn't all that big, we will only be covering a small portion. Italian wine and food right around the corner, a small issue is going to be we were supposed to learn a few words in Italian, that didn't happen. Maybe on the plane ride over, or our 3 hour layover in TO?

February 11 arrival day
So, things did not go as planned. Our 4PM scheduled departure from Moncton turned out to be an 8PM departure from Moncton due to weather in Toronto. So, managed to change our flights to Florence, but only because this plane was leaving an hour late from Toronto did we have a chance to make it. Arrived in Toronto with 15 minutes until our next flight, there were 3 of us on our flight, and we ran. Of course we were just about as far from our gate as we could have been but we did make it.

Next we knew there would be an issue in Frankfurt as we only had about 30 minutes for our connection to Florence and we had to clear customs and security again. Frankfurt is a pretty big hub, and we had to get on a bus to get to the terminal, we saw the minutes ticking away and were pretty sure we would not make it. We got to the terminal at 2:15, our flight was at 2:30, they stopped us before we even started to run, we had been rebooked on a later flight.

Problem was the next flight at 4:00 PM was fully booked so we were waitlisted, but confirmed on an 8;00PM flight. Long story short we did not make the early flight so stayed in the Frankfurt airport from 12:30 until 8:00PM. In hindsight we should have just said we would take the late flight and go into Frankfurt for the day and visit, we haven’t been there yet, and there is a metro to town right from the airport. On top of this we volunteered to be bumped off the late flight to get 250,00 Euro, but no shows at the end so off we were to Florence.

Because we were so late landing in Florence we decided to spend the night there rather than spending another 1.5 hours on a train to get to Lucca. Contacted the person we are renting from and told them we would only arrive the next day. Found a hotel room near the train station for 50.00 Euro including breakfast on the internet and off we go. Taxi from the airport to the hotel was 30.00 Euro, nearly the same price as our hotel! Hotel was fine, we actually had 2 bedrooms, which gave us lots of room to organize. So we finally made it to Italy, after killing 14 hours in airports!

February 12, 2017
Woke up in Florence after a great sleep in our cheap little hotel. Cutest little elevator to get up to the 4th floor, thank goodness it was working, would not have wanted to climb all those stairs with all the crap we are travelling with. Decent continental breakfast, then we are off for the morning.


First stop was the train station where we bought tickets to Lucca which is about 1.5 hours away by train, 7.50 Euro each. Next we go out and explore. We are coming back to Florence in about 3 weeks for 2 nights so won’t be doing any museums this time, just a walkabout until our train leaves at noon.

We have already prebooked a lot of sites for when we return, so it is going to be really easy to find our way around next time. Florence is a pretty compact city, all of the major attractions seem to be within a 20 minute or so walk. Really looking forward to our weekend visit. 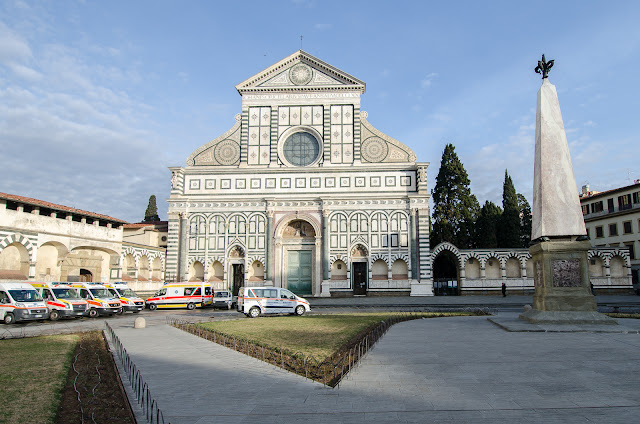 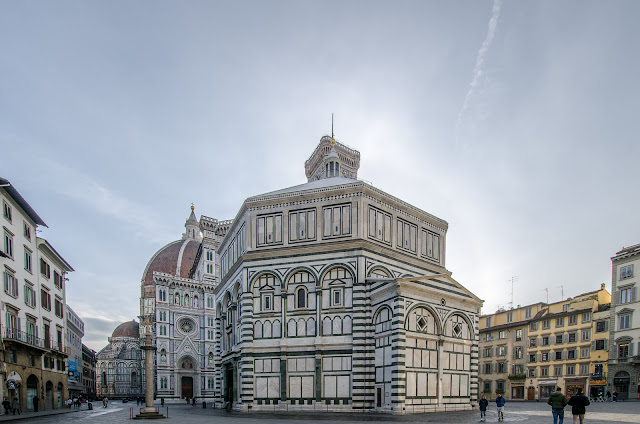 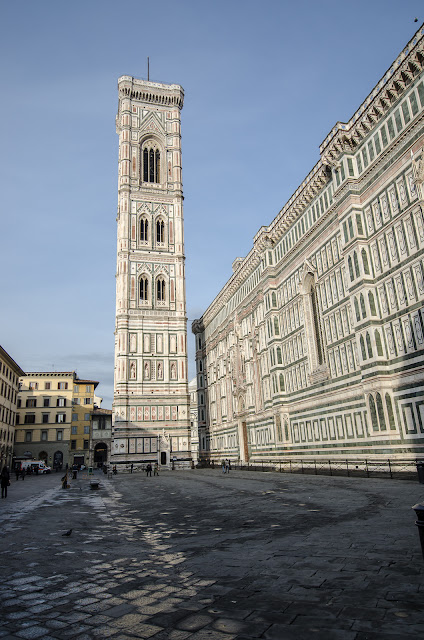 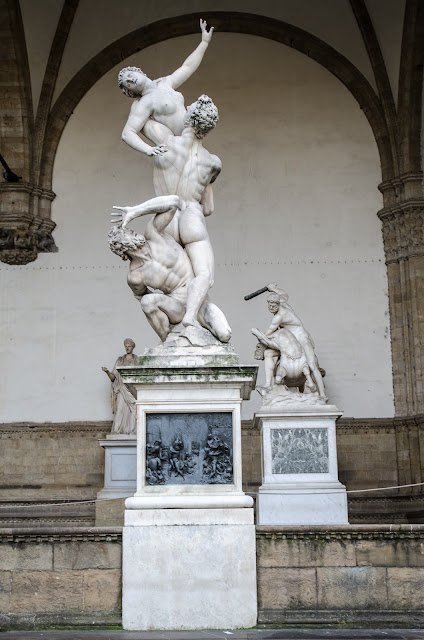 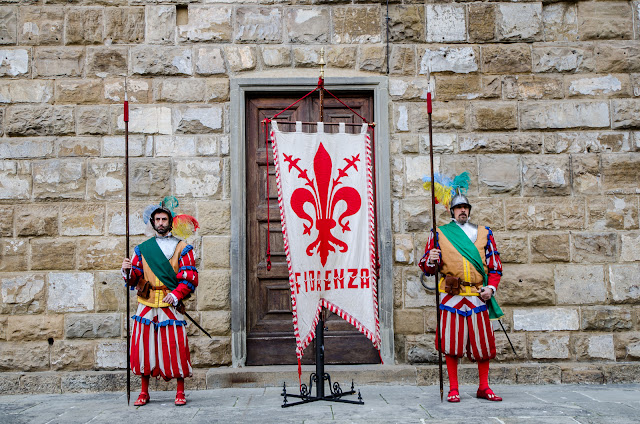 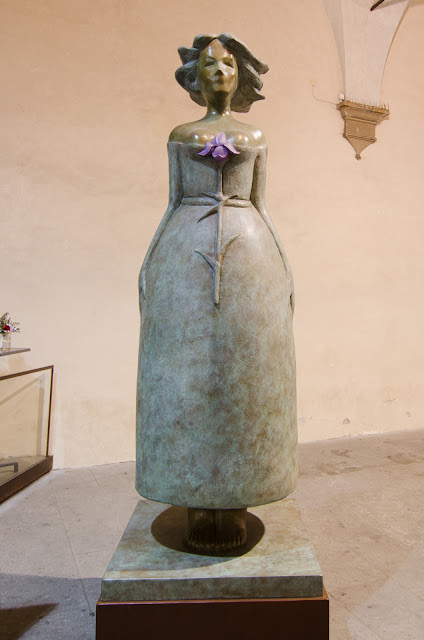 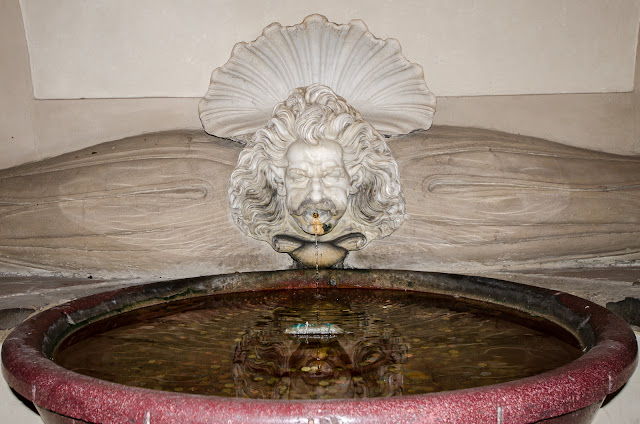 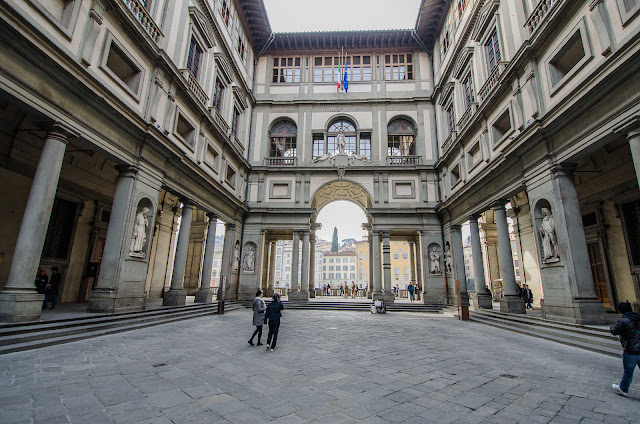 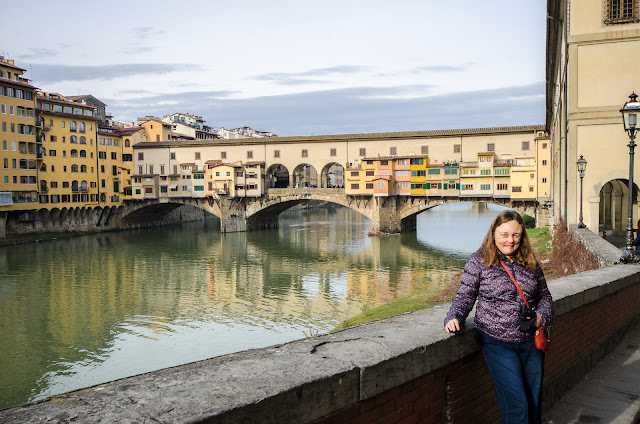 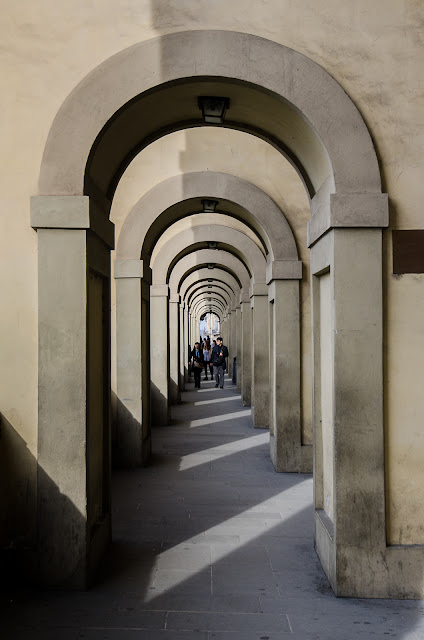 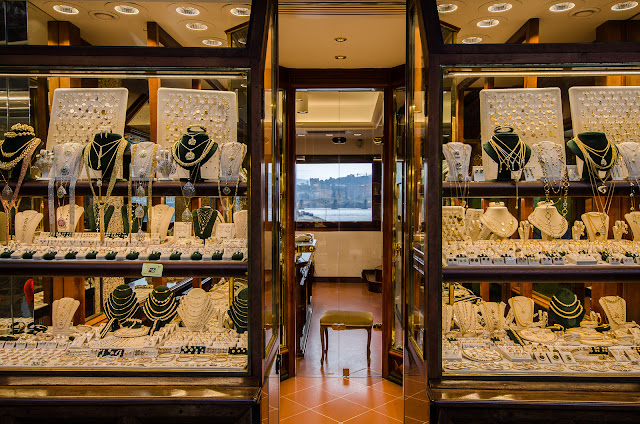 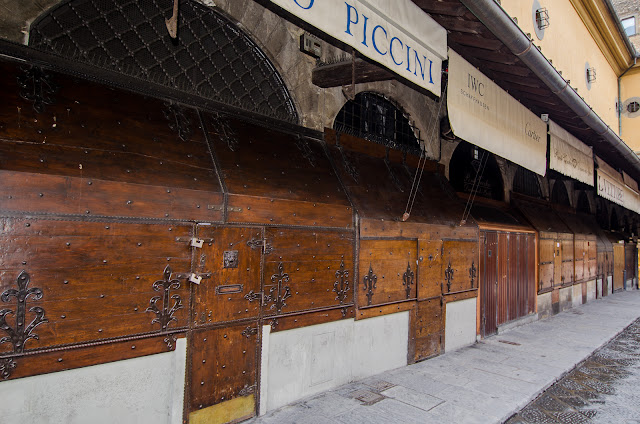 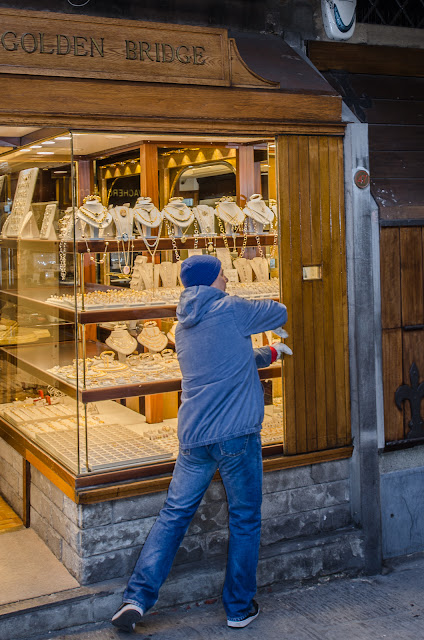 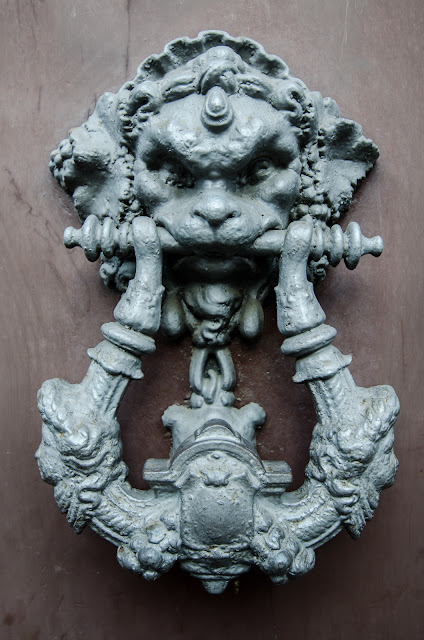 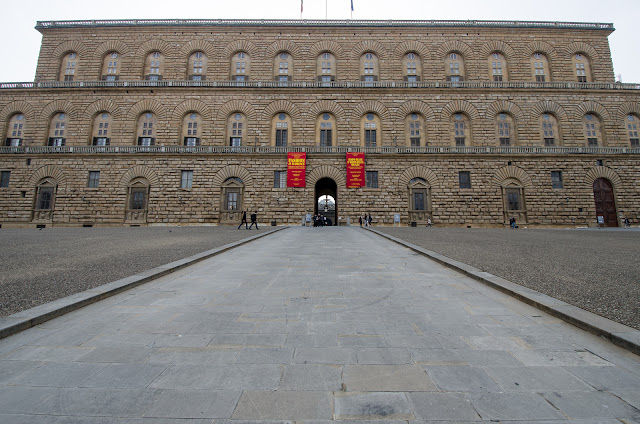 In one of the piazza (Square) there was a market.  Wish we had more time to spend here but we have to be back at the hotel in about 20 minutes. 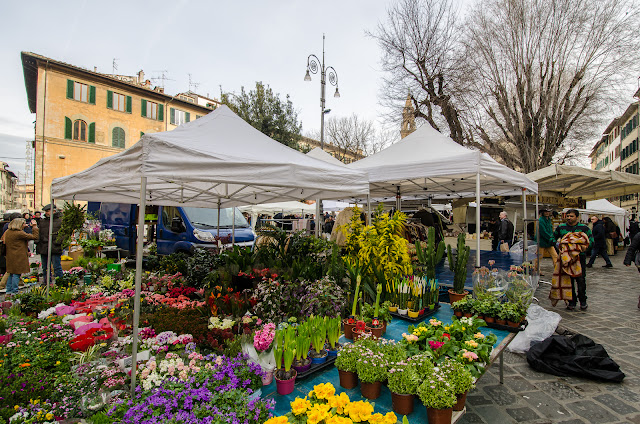 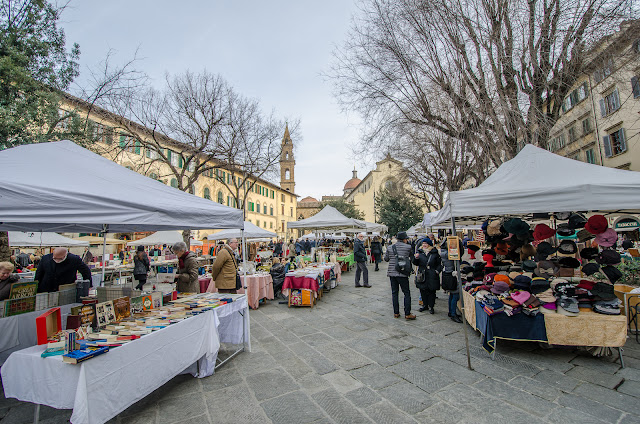 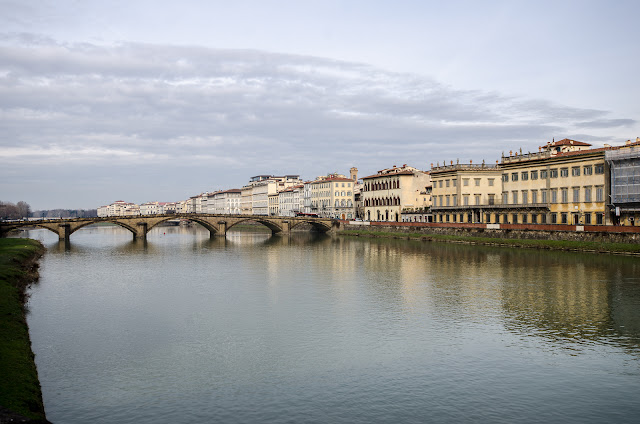 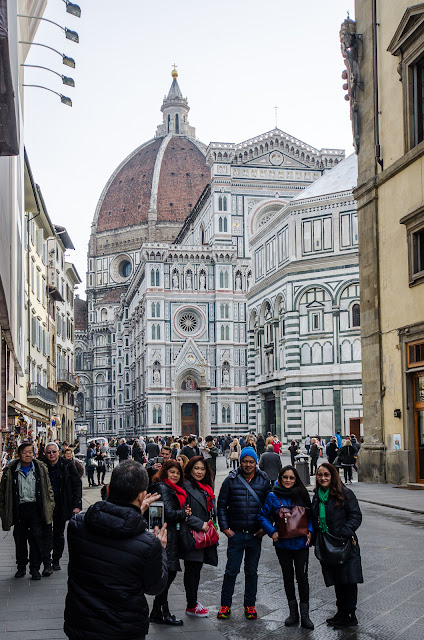 Back at the hotel at 11 for checkout.  Andre asks if that is the Mercado (Market) we can see from the room.  So he is off to explore some more while I stay with the luggage and relax.  The market is not open on Sunday but the food court is and the vendor outside with stalls are.  Will return again on the Saturday when we are back in Florence. 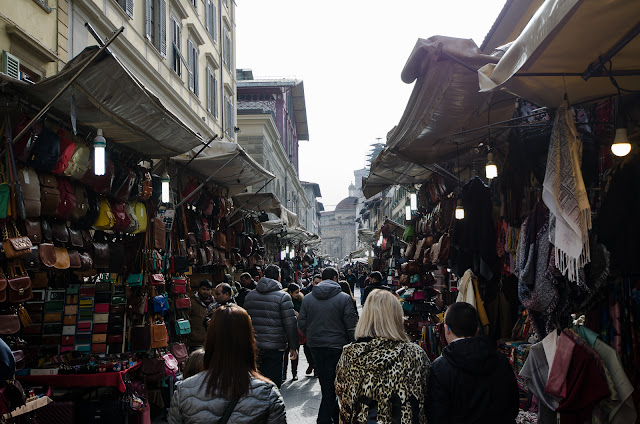 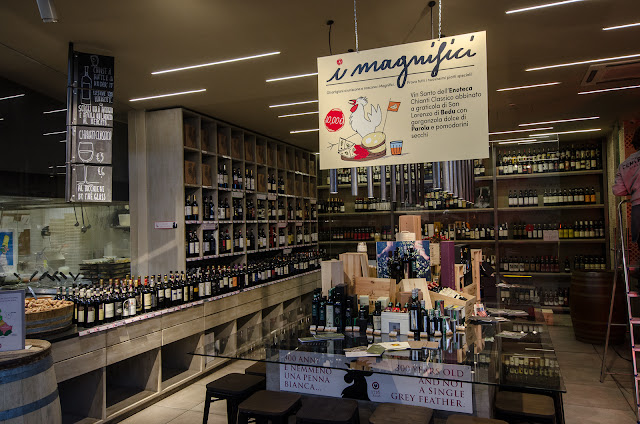 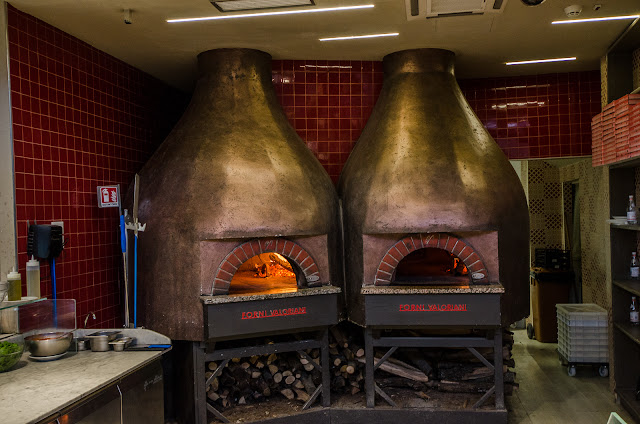 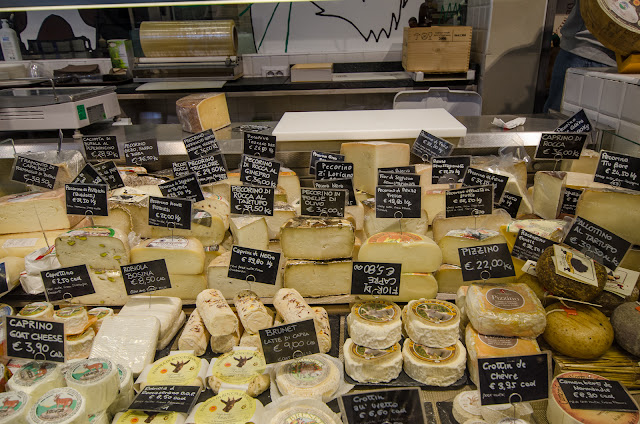 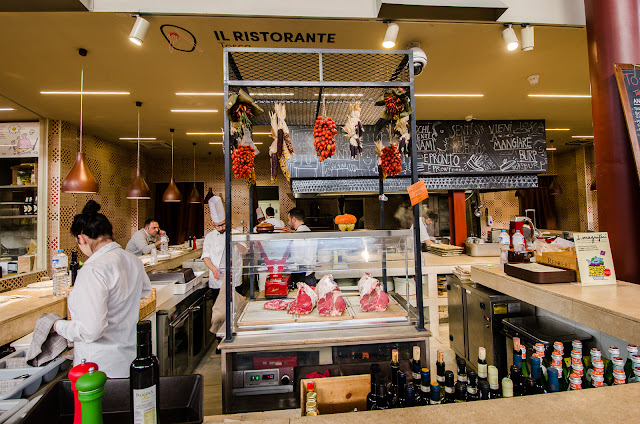 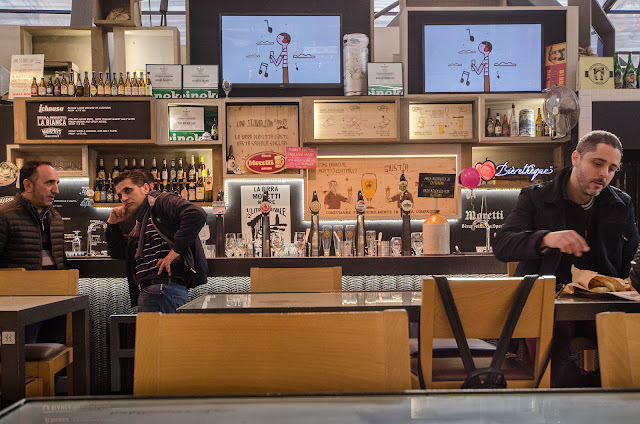 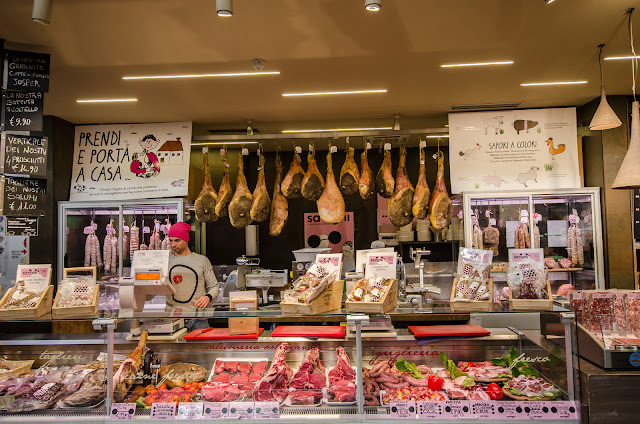 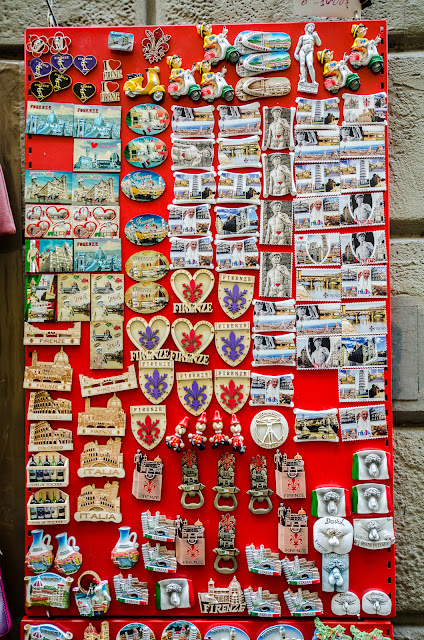 Train to Lucca is so easy, once you buy the ticket. We are pretty well travelled but still we got suckered! No real people to talk to for purchasing tickets, but it is pretty simple at the kiosks, but of course this man tries to help us. He was “buying” a ticket beside us and kept trying to help, getting a little annoying. At the end he asked for money, I said no, Andre said he didn’t have any change, pulled out a pocket full of change and the guy took 2 Euro. Andre thought that he was looking for change for his bill. Lol, we won’t get caught with that one. At least the guy only took 2 Euro, could have been worse. They tried again when we were going to the train, you have to validate you ticket before getting on at a machine, well this girl came up to ask us if we wanted help finding our way to our train, quick no and go away from me.


Arrived in Lucca and found our apartment. Met the woman we are renting from and given a tour of the apartment. Of course it looked much better in pictures online, but it is perfectly fine for our needs.
Heat is not included in the apartment we are renting.  We have to pay 1.3 Euro per cubic meter of gas we use.  There a meter downstairs that we can monitor to see how much we are using.  We down the heat a bit and will see at the end of 1 week how much we are using. 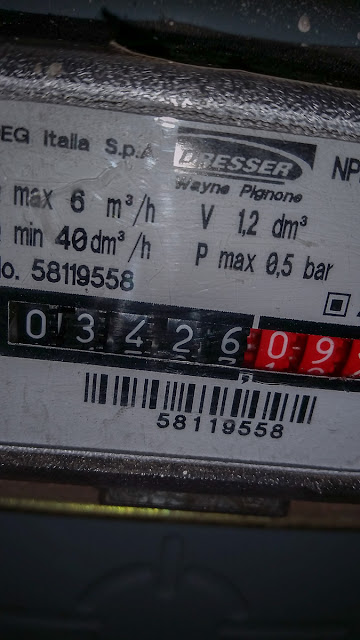 We have 2 bikes included with the apartment and have already been out exploring for a couple of hours. Andre is going to have to find somewhere to get more air in the tires and raise his seat.

Lucca is a walled city, but the top of the wall has been converted to a biking/walking path which is about 4km long. So many people out today, it was a gorgeous day really like spring that I think because it was Sunday afternoon everyone was out taking advantage of it. It was really too busy to bike so we ventured down into the streets to explore. Not too many cars in town as it is pretty much a pedestrian city inside the walls. Got twisted around a little bit but everything is inside walls, so you can never be too far from where you want to be.

We tried to do our first big grocery run but the supermarket was closed because it was Sunday, first thing on Andres list for tomorrow. We did stop at a minimarket and picked up a few things to make supper tonight, but we’re hoping the large supermarket will have better prices. Stopped at a few restaurants in town to look at prices, think we will be eating at home a lot, we will miss the tourist menus from Portugal and Spain which were about 10-13 Euro including wine.

We had a great first day here and I know we missed lots on our bike and walking tours of Lucca so really looking forward to the next 5 weeks.

Andre made paste with meat balls and we enjoyed a bottle of Chianti with supper.

Played 2 games of crib which keep us away for a while. It is now 9:00 PM, that was my goal for tonight to stay up until 9:00. Am beyond exhausted so off to bed for me. Tomorrow will be my first day of work from here, so far so good with wifi, lets hope it stays that way for the next 5 weeks.!
Posted by Andre and Wendy at 11:27:00