I am on my way to San Ignacio Belize to join an ongoing GAP Adventure tour. I was scheduled to leave Moncton yesterday morning at 6:15 but because of weather this this not happen. Last night I flew into Toronto where I spent the night. I head to the airport early with the hopes that I can get on an earlier flight to Cancun instead of the 10am flight that I am scheduled on. No such luck as the plane is full. I am now having breakfast. While I am half way thru my breakfast I see online that there are 2 free seats that opened up on the 7 am flight to Cancun. I quickly pay for my breakfast and run to see the customer service.  I`m lucky and got on the flight. I will now get there 3.5 hours early than my other flight. We landed about 15 minutes early and no line up at immigration. My luggage was one of the first ones to come off and was out of the airport in about 15 minutes.

Found the ADO ticket counter and got great connections. I was lucky and just made the 12:00 bus Chetumel, the next was after that was at 1:15. The bus has air condition. Not sure if the next few will or not.  I actually had to put my long sleeve sweater over my T-shirt as I was cold but still warmer than NB.


Before boarding I grabbed a bottle of 100 Anos resposado Tequila at the OXXO  for 137 pesos (12 dollars) and a chocolate bar and an ice cream sandwich (Lunch of champions) since I only had 15 between the switch from the airport bus and the bus that goes to Chetumel.

We stopped at Playa del Carmen at 1:30 for about 5 minutes.  I was quick enough to get the free wireless and send out an email. 4 more hours to go.Drove thru the town of Tulum.  Looks a lot a place that might be fun to visit for a day or 2.  Maybe I will stay there on the way back to Cancun the night before I leave.

I will see if I make it all the way to San Ignacio today of if I will have to stay somewhere in between. The lady next to me speaks English and Spanish.  She lives in Chetumel.  She was born in Montreal, so she speaks French as well and she has learned Italian and Portuguese as well. She says that people are taller as you go further north and most of her Mexican cousin are tall as well. I feel more comfortable now that I know we are on the right bus and when we stop, she can tell me what is happening.

We made another stop somewhere at 3:30.  Don't ask me where I am.  The driver announced Cinco something.  My travel companion told me that we had a 5 minutes stop. I decided to go stretch my legs. Some ladies were selling chicken open face tacos. I took my coins from my pocket and showed them to her. She said something in Spanish. Another man from the bus figured I did not understand and said they were 7 pesos each (60 cents). I took 3 and hop on the bus. My travel companion is a vegetarian.  I told her sorry that I had one of her feathered friends with me.

A couple more hours to go.  The trip is not very scenic. Trees, and trees and some more trees.  No hills, no rivers, only the odd house once in a while.  If I am lucky a car passes the bus for excitement. My travel companion is asleep as she had a long week. So no one to talk to and only trees to look at.  Wait, we are now at a small village. At each tope (speed bumps) vendors are there with an assortment of stuff to sell (Coke, water, fruits, tacos) to the cars when they slow down.  Wow that was exciting. We are now back in tree-land 2 minutes later. 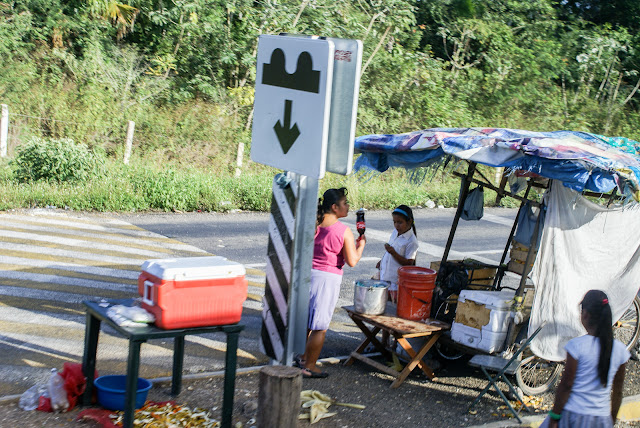 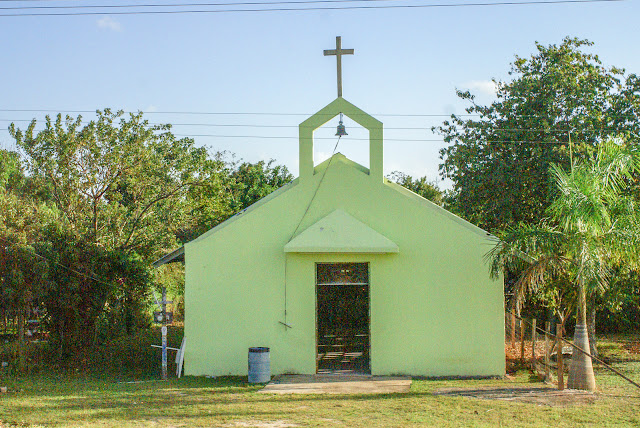 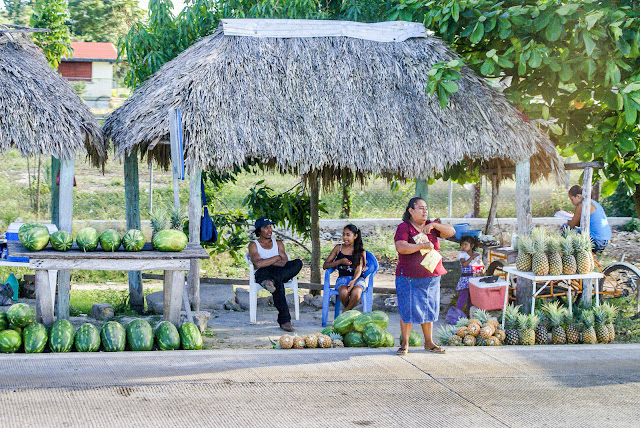 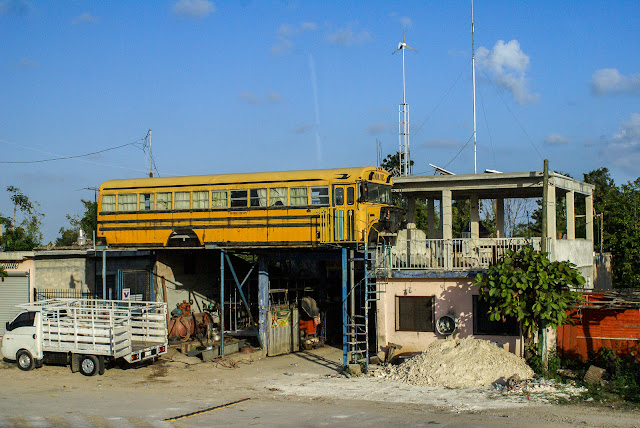 I finally arrive at the last bus station in Mexico. No bus to the border so I get a cab. I get told by the border security that I need to pay 20.00 now for when I get out later. No receipt is giving. Not thinking strait I pay it without arguing.  I will see in 2 weeks when I leave if this was a scam or not.

Get on the bus to Belize City, 3.5 hours in an old school bus from the 60s.  Music is blaring and the bus is pack. My knees are touching the seat ahead of me.  We stop frequently to pick and drop off people. No air condition on this bus and no washroom.

Get to Belize city at 9:30 and the bus to San Ignacio is waiting for us.  On we get, no break, I asked the man sitting next to me how long and he says 3-3.5 hours. I was thinking it was 2.5 hours, I hope he is wrong.  Since it was late and it was the last bus it only took 2 and 20 minutes.  Thanks god. Even less legroom on this bus.  The old school bus seated 65 and people were standing when we first started. must have been close to 75 people on board at one time.  No loud music this time.

Arrive at San Ignacio at 11:45. I go check in the hotel next to the bus stop.  20.00 US but at this point I do not care just as long it is not roach infested.  It's clean but not pretty.  Pink curtains from the 60`s, saloon door on the bathroom, shower is held together with duck tape and the floor is what my mom had to line the kitchen cupboards with.  I will wait until tonight for my shower. My room faces the bus stop and the street but I do not care about the noise and I fall asleep within minutes.